December 14th, 2021 – Pegasus Resources Inc. (TSXV: PEGA) (the “Company” or “Pegasus”) is pleased to announce results of the summer 2021 prospecting and backpack drilling program carried out on its wholly owned (100% Pegasus) Vertebrae Ridge Property located north of Golden, British Columbia. The Vertebrae Ridge Property is comprised of four claims encompassing about 5,324 ha (13,156 acres) roughly 81 kilometers northwest of Golden, BC.  The eight-day prospecting campaign during August 2021 resulted in the extension of known polymetallic mineralization trends, the confirmation of significant mineralization continuity at historically sampled locations (see January 13th release), and the discovery the Canon Cu-Au Zone.  The Company believes the newly discovered Canon Zone, may be related to a large oval, alkaline intrusion located a short distance west of the mineralized area.  Highlights include (See Fig 1): 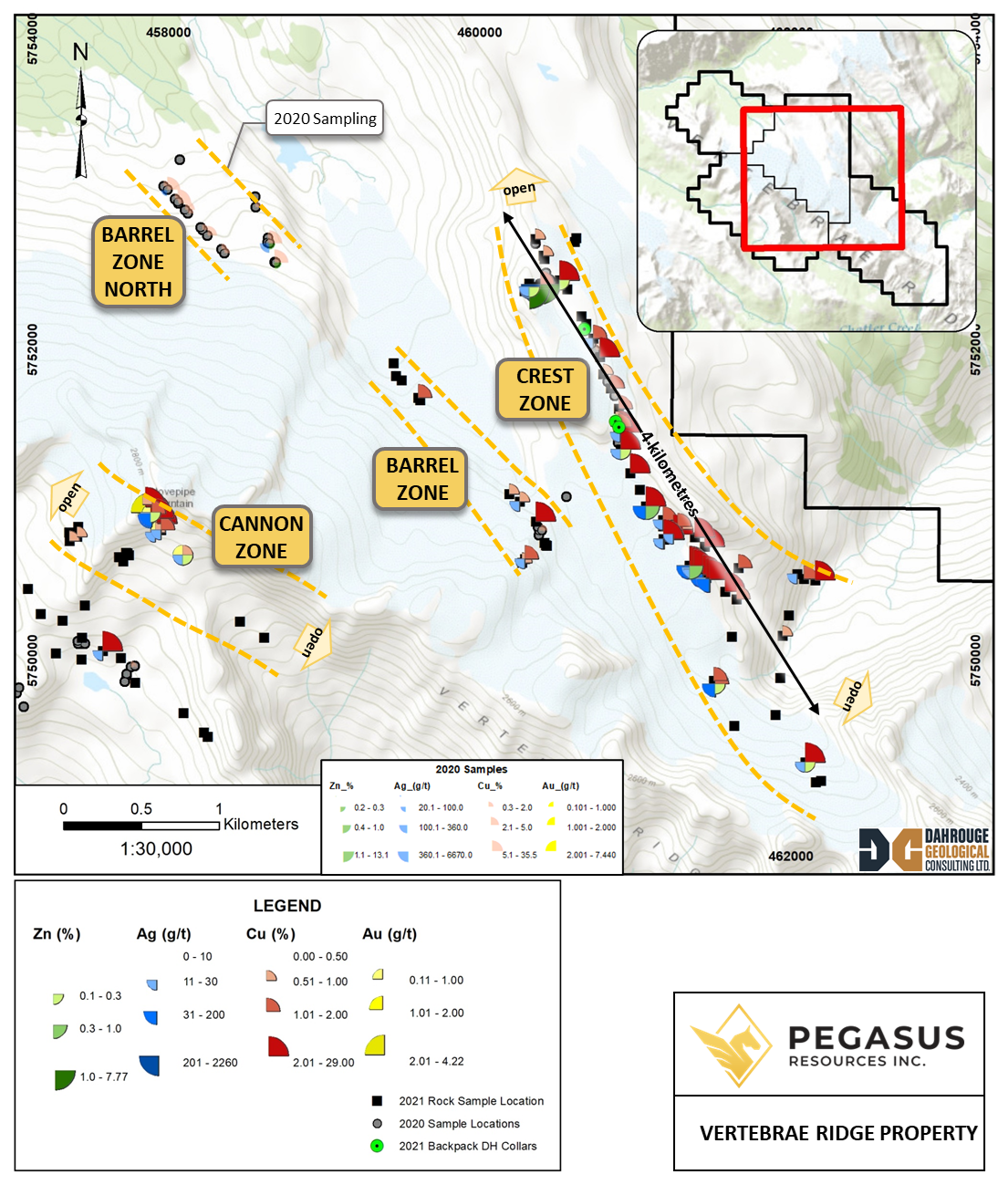 Charles Desjardins, CEO of Pegasus states, “The copper-silver mineralization at Vertebrae Ridge represents an exciting new discovery within a virtually unexplored district of east-central British Columbia.  The large scale of mineralization, which appears over kilometers, presents us with an exciting exploration target.  At a time when copper is seeing increased demand from a world transitioning to electric energy, new discoveries will be required to sustain the momentum of the worlds energy transformation."

The Cu-Ag-Zn mineralized system, described in a prior news release (January 13th, 2021), was extended and sampled over nearly 4,000 meters strike length (see Figure 1) and averaged 2 to 5 meters wide, reaching 15 meters width locally. Mineralization consists dominantly of finely disseminated chalcopyrite-chalcocite-malachite-azurite with instances of sulphide veinlets and small pods (~1m2) of semi-massive chalcopyrite. The mineralization appears associated with polymetallic quartz-carbonate veins and breccias, is open in all directions, and is orientated southeast-northwest.  The veins crosscut altered limestone, dolostone, quartzite, and mudstone. Galena mineralization was identified in newly discovered parallel veins in the southeastern extent of the system. Polymetallic mineralization also appears to increase spatially throughout the zone and in strength toward the southeast.

Four additional galena-bearing brecciated quartz veins, similar to a vein from which sample 148631 was collected (see January 13th, 2021, news release), were discovered in the vicinity of this occurrence during the 2021 program. The mineralized system of veins and breccias measure over 100 meters along strike and is orientated perpendicular to the Crest Zone, striking northeast-southwest.

Four shallow backpack style drill holes were attempted along Zone 1 in outcrops bearing anomalous copper mineralization sampled during the fall 2020 program. Chalcopyrite-chalcocite mineralization was confirmed at depths of up to 1.55 meters, and in all cases ended in mineralization due to severe depth limitations of the drill.  Malachite and azurite frequently occupied open fractures within core. Figure 2 below displays chalcopyrite mineralization with pyrite rims in a quartz breccia matrix from a drillhole at the southern extent of Zone 1. 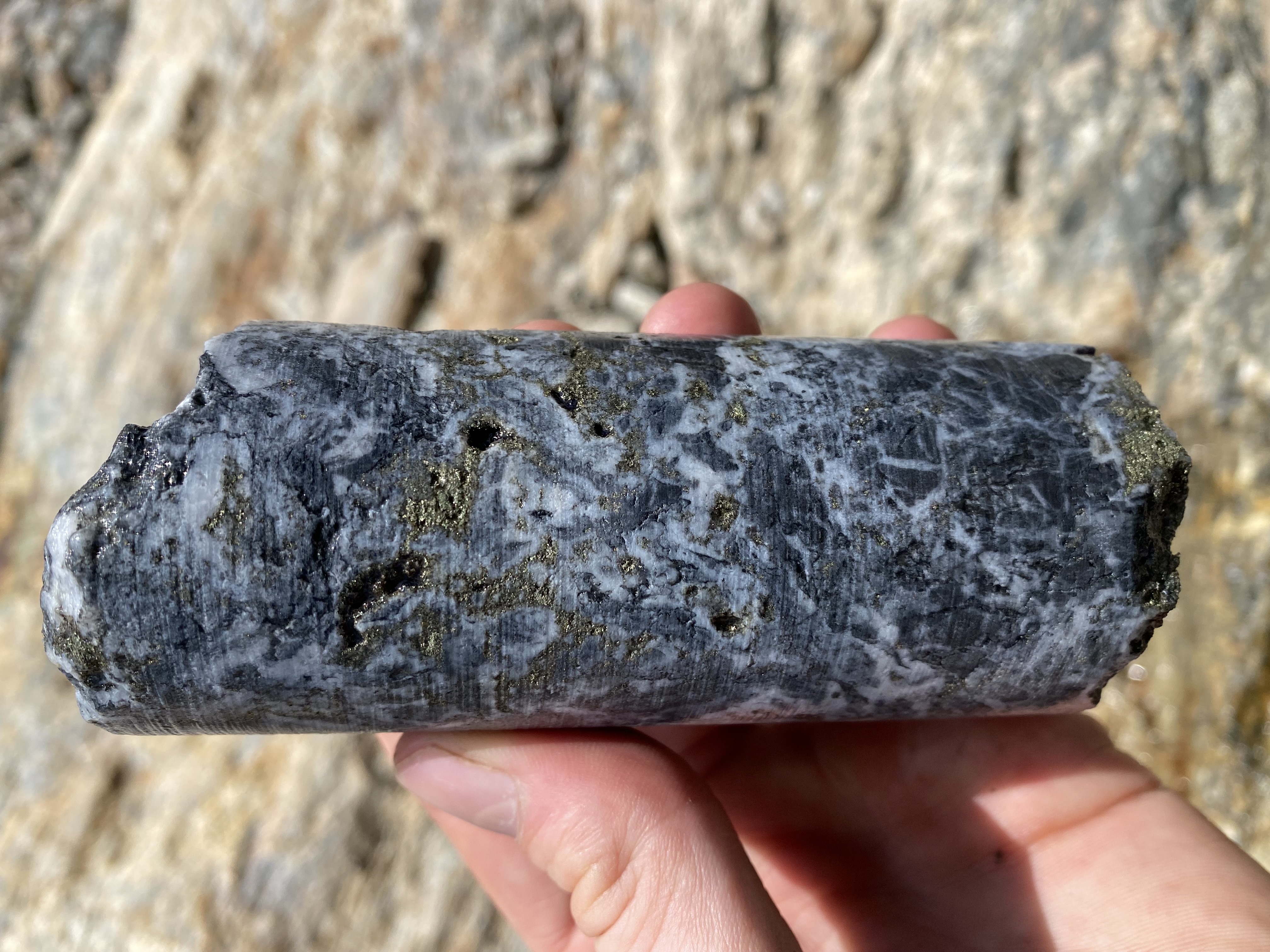 Mineralization at the Barrel Zone was examined and sampled over 1500 meters strike length where widths approached 1-2 meters.  It is considered open at both ends. It appears to strike towards the copper mineralized system discovered in the fall of 2020 and may represent the same mineralized system and would be an aggregate strike length of 3500 metres.  13 samples were collected along this trend where mineralization consists of chalcocite-chalcopyrite in comparable quantities within coarse grained quartz-carbonate veins/breccias. The system crosscuts weakly altered limestone, dolostone, and dolomitic mudstones along a mapped thrust fault. Zone 2 likely forms a continuum with Zone 2 North, though the trend cannot be confirmed due to extensive glacial ice and debris cover. If conjoined, Zone 2 would reach nearly 3,400 meters. Zones 1 and 2 may converge in the southeastern claim of Vertebrae Ridge, though additional exploration is required.

The Cannon Zone was discovered during the August 2021 program along an unmapped steeply dipping fault about 3 kilometers southwest of the Crest Zone and due east of a previously mapped alkaline intrusive. This zone is orientated southeast-northwest, measures 1-5 meters wide, and was confirmed over a strike length of nearly 1,000 meters. The Cannon Zone occupies the contact of quartzite and mudstone, with mineralized quartz veins often following sheer planes in phyllite. Mineralized quartz-carbonate breccias were also observed to crosscut quartzite and weakly altered limestones and dolostones.

The Cannon Zone consists of chalcopyrite-chalcocite with malachite and azurite frequently staining outcrop and boulders. Mineralization appears to increase to the Northwest though additional exploration is required to better understand this system.  Analytical results show appreciable gold (1.44 g/t Au and 4.22 g/t Au) when compared to the other base-metal enriched zones on the property. 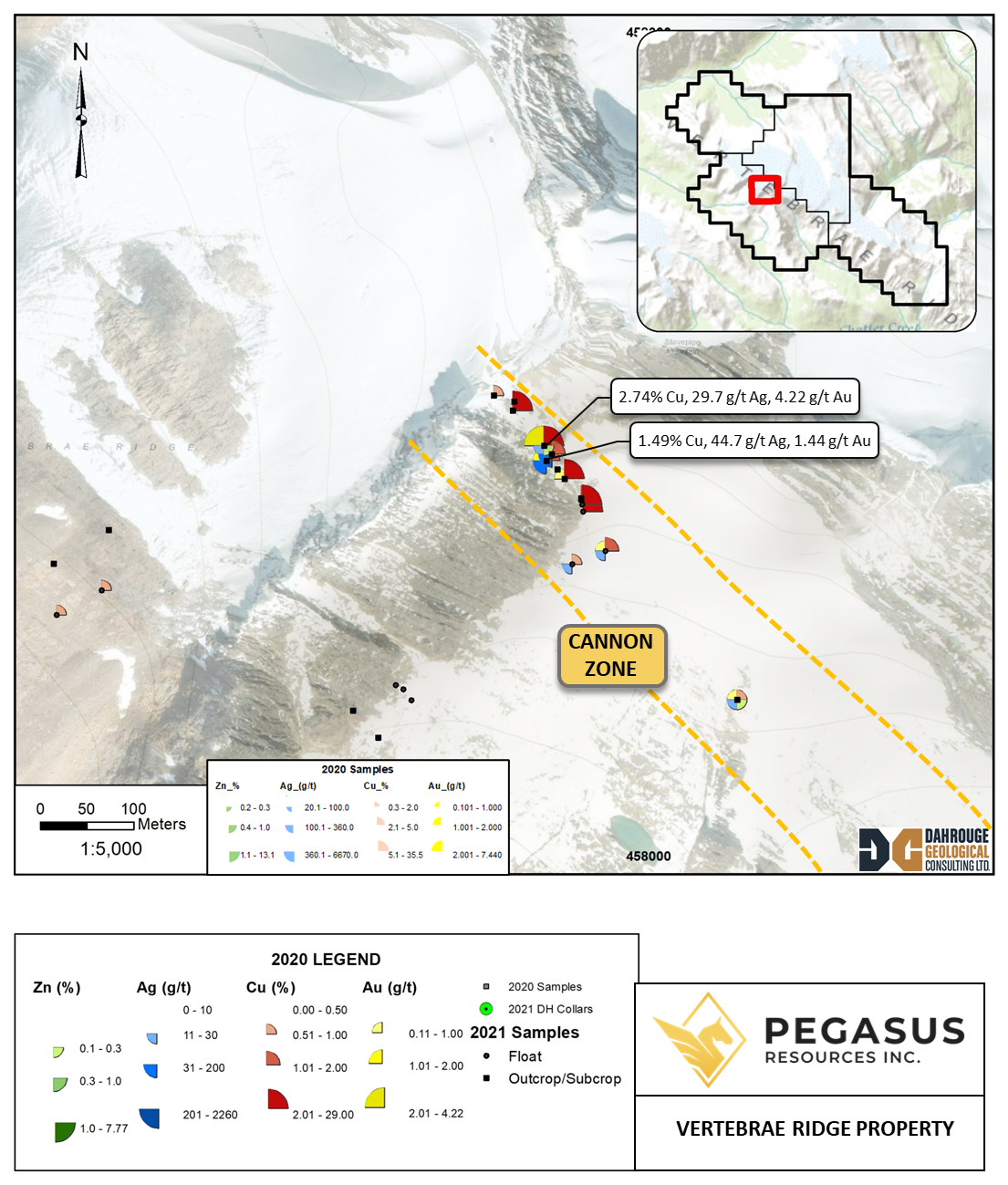 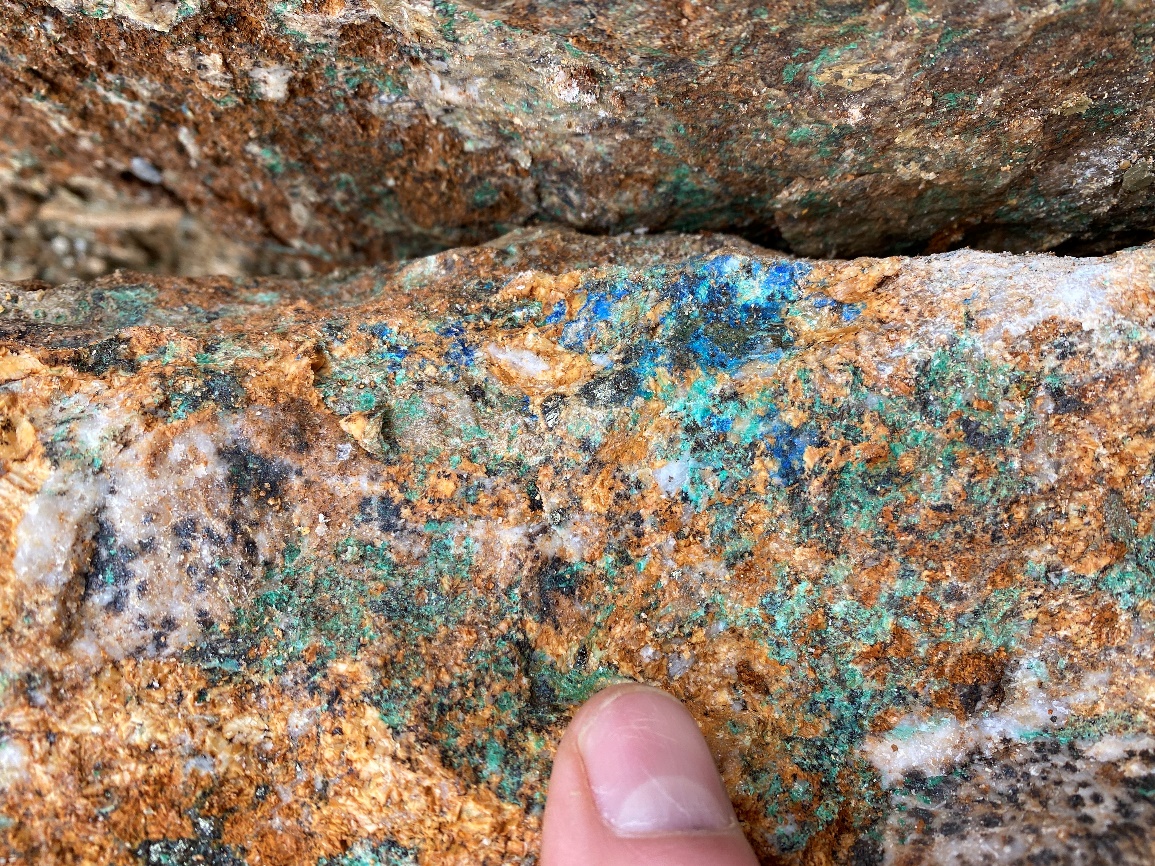 The technical information in this news release was prepared and/or reviewed by Nathan Schmidt, P.Geo., a Qualified Person as defined in National Instrument 43-101.

Pegasus Resources Inc. is a diversified Junior Canadian Mineral Exploration Company with a focus on uranium, gold and base metal properties in North America. The Company is also actively pursuing the right opportunity in other resources to enhance shareholder value. For additional information please visit the Company at www.pegasusresourcesinc.com or contact Charles Desjardins at charles@pegasusresourcesinc.com