VANCOUVER, BC—August 24, 2022– Pegasus Resources Inc. (TSX-V: PEGA: Frankfurt – OQS2, OTC/Pink Sheet symbol: SLTFF) (the "Company" or "Pegasus") is pleased to announce that based on the recent radon survey results, in combination with the historical geophysical work, Pegasus is looking to advance its Pine Channel Uranium Project (the "Project" or "Pine Channel"), located in the Athabasca Basin region of northern Saskatchewan, to the drilling stage.

The radon survey comprised two grids, Grid A and Grid B, consisting of 461 and 217 radon sampling points. Grid A spans roughly 3km east to west, starting along the shoreline and extending approximately 850m to the south. Grid B is 1300m by 750m and is located to the south of Grid A.

Two linear anomalous radon trends are interpreted on Grid A,

A NNE to SSW trend and a WNW to ESE trend. Both are interpreted to reflect basement structural features.

There are three ENE-WSW trending anomalous radon trends. The three diminish in intensity toward the WSW. Given that the dominant ice direction in this region parallels these trends, RadonEx interprets that they may be caused by uraniferous boulder trains. Alternatively, they may be due to ENE-WSW basement structures that parallel the nearby Grease River Shear Zone. 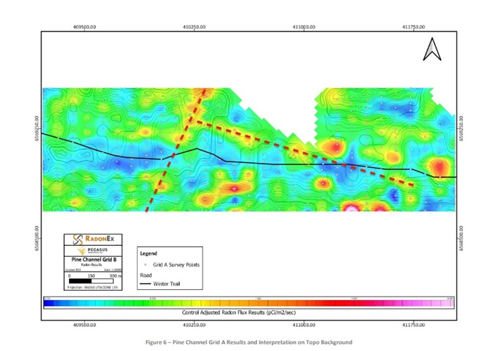 "Exciting times for Pegasus investors. The radon survey came back, and we have drill-ready targets!" stated Chris Timmins, President of Pegasus Resources. "Pegasus, over the coming weeks, will apply for the necessary permits and consult with the group representing the northern communities and First Nations groups, the Ya’ thi Néné Lands and Resources (YNLR) office, leading up to a winter drill program."

The Project with a thin cover of Athabasca Basin, is underlain at shallow depths by the structurally complex Tanto Domain, which is host to numerous U, Cu, Ni and Au occurrences.

The scientific and technical information contained in this news release has been reviewed and approved by Neil McCallum B.Sc., P.Geo. of Dahrouge Geological Consulting, who is a “Qualified Person” as defined in NI 43-101.

Pegasus Resources Inc. is a diversified Junior Canadian Mineral Exploration Company with a focus on uranium, gold, and base metal properties in North America. The Company is also actively pursuing the right opportunity in other resources to enhance shareholder value. For additional information please visit the Company at www.pegasusresourcesinc.com or contact Charles Desjardins at charles@pegasusresourcesinc.com.