The Confederation Lake project totals ± 20,700 hectares (± 51,700 acres) over a 60 km length of VMS-favourable geology. Access is by first class, all-weather gravel roads and a network of secondary forestry access roads. The 115 kV power line from Ear Falls to Pickle Lake and Musselwhite crosses the property. The natural gas pipeline to Red Lake runs along Hwy 105. The project consists of several properties located in the Joy and Lucky Trends. 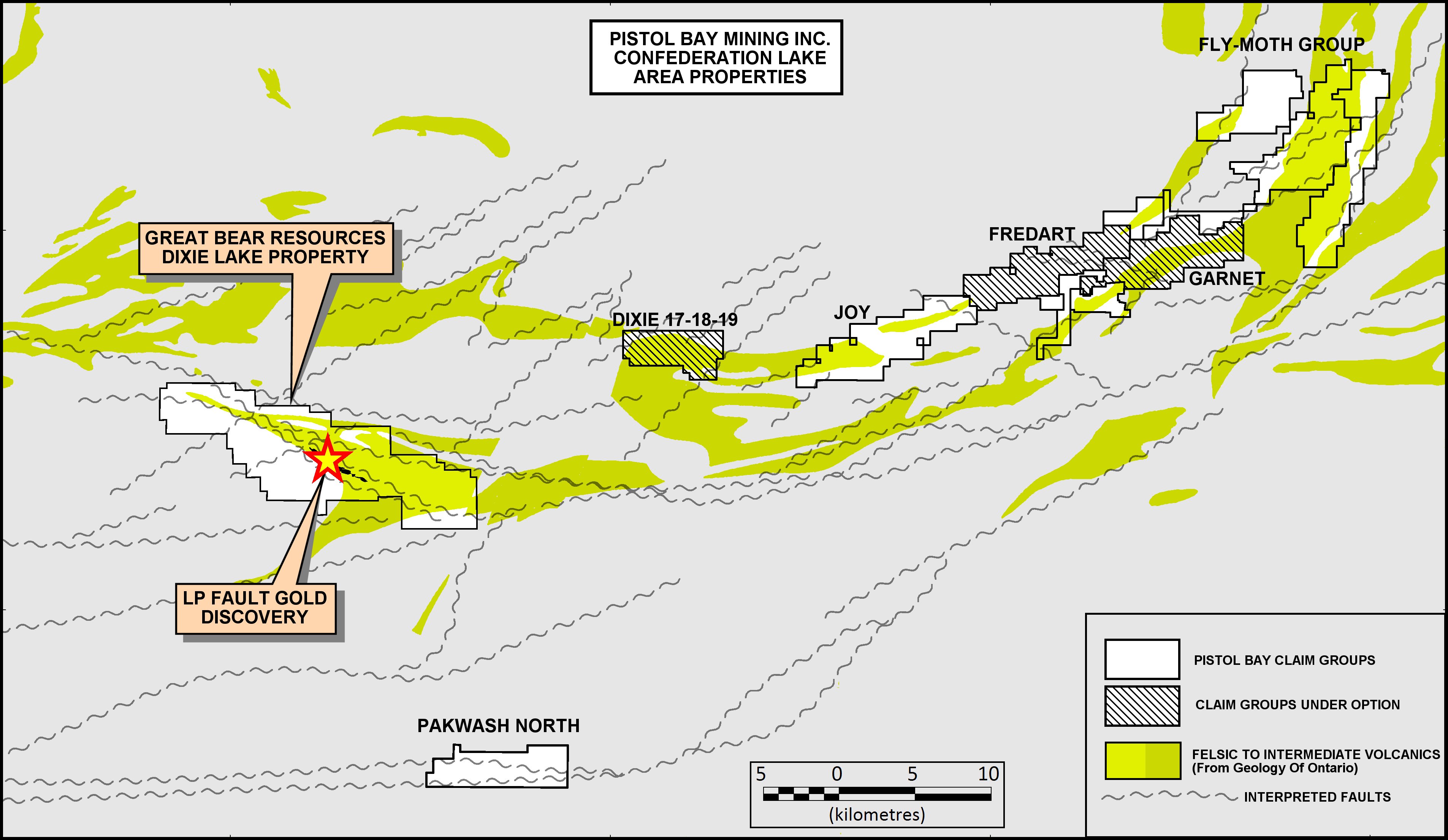 This property was 80% optioned out to Infinite Ore Corp. on February 6th, 2020. For more information please see the associated news release:

The Garnet Lake / Arrow Zone property totals 2,733 hectares (6,752 acres) and covers a 31 kilometre length of the Confederation Lake greenstone belt. It includes two substantial mineral deposits and a number of mineralized drill intersections that are in need of follow-up drill testing. Mineralization on the property is all of Volcanogenic Massive Sulphide (VMS) type, dominated by zinc, copper and silver, with occasional associated gold values. 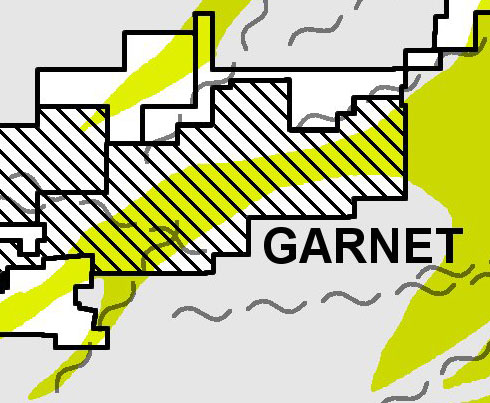 The property has a 43-101 compatible mineral resources as follows:

This property was 80% optioned out to Infinite Ore Corp. on February 6th, 2020. For more information please see the associated news release:

The Fredart or Copperlode A property is 2,620 hectares (6,472 acres) and has a historical mineral resource of 425,000 tonnes grading 1.56% copper and 33.6 g/t silver.* The zone was drill-tested to a depth of approximately 200 metres over a length of 350 metres, and was reported as being open at depth. The area was also explored for molybdenum in the 1970s, and samples containing up to 1.46% Mo were reported.

This historical resource estimate does not comply with the standards of National Instrument 43-101 and has not been reviewed by a Qualified Person. 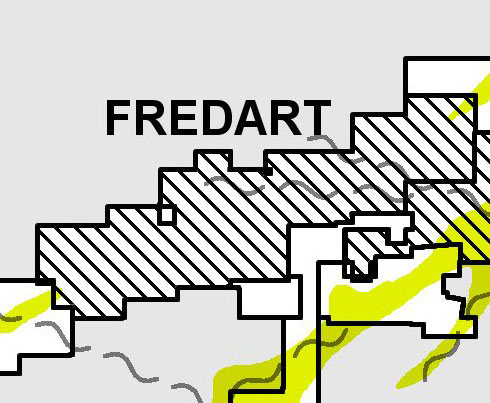 A 2,100 line km VTEM Plus airborne survey was completed in 2017 that detected parallel conductors or extensions of known conductors in lengths of 400, 850, 900 and 950 metres at the Fredart Corridor which is within a total strike length of 22 km.

A diamond drilling program was carried out by AurCrest in 2010 in an attempt to expand the resource base by drilling down a possible easterly plunge in the area of an IP anomaly. A fence of five holes was drilled without intersecting any significant mineralization. A borehole EM survey carried out on those drill holes in 2010 identified a strong off-hole conductor in two adjacent holes, with an interpreted conductive zone lying between the two holes. It is anticipated that this anomaly may represent the down-plunge extension of the Copperlode A zone or possibly a new zone.

This property was 75% optioned out to Infinite Ore Corp. on January 29th, 2020. For more information please see the associated news release:

The Dixie property consists of 1,072 hectares and is located in the Confederation Lake greenstone belt, 35 km southeast of Red Lake Ontario. The property is divided into numbered zones for identification clarity.

The three Dixie mineralized zones were explored by Selco in the 1977-1981 period, by Noranda in 1989-1992 and by Tribute Minerals Inc. between 2002 and 2009. Selco drilled a total of 40 diamond drill holes, Noranda drilled 7 holes and Tribute Minerals drilled 11 holes. Highlights include: 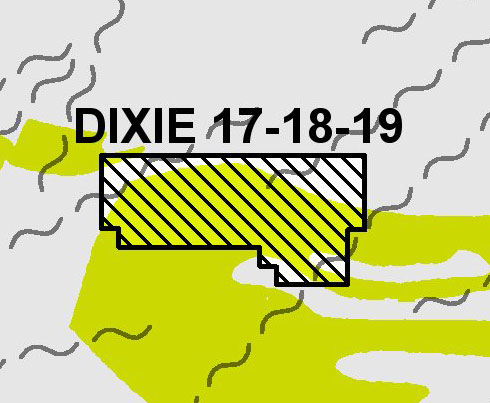 Note: this is a historical resource estimate that does not comply with NI 43-101 and has not been reviewed by a Qualified Person to assess its reliability. It was presented in a 1992 assessment report by Noranda Exploration, and post-dated all the diamond drilling done on the zone to the present. The method(s) of calculation were not disclosed. The estimate was called a mineral inventory, a term which does not conform to any of the classes of mineral resource or mineral reserve recognized by NI 43-101. Its relevance is that demonstrates the order-of-magnitude size and grade of the mineralized zone).

Tribute Minerals carried out a Titan 24 deep earth imaging survey over the Dixie 19 zone and a series of previously untested airborne EM anomalies, east of and on strike with the Dixie 18 zone. This survey defined a new blind anomaly (i.e. one which does not come to surface) beneath the Dixie 19 zone.

Two diamond drill holes put down in 2002 tested what appeared to be the top of this new zone beneath Dixie 19. Drill hole DX2002-01 was reported to have intersected 1.25 metres averaging 9.71% Zn, 0.20% Cu and 10.7 g/t Ag, and drill hole DX2002-04 reportedly cut 1.25 metres averaging 5.32% Zn. These intersections were at vertical depths of 262 and 350 metres respectively. No deeper drilling was done on this target, despite the interpretation that the top of the conductor was at 375 metres below surface.

A second, much larger, and much deeper conductive body, was located north of Dixie 19, and approximately on strike with the Dixie 18 zone (Note: the western two-thirds of the property, including the Dixie 17 and 18 zones, was not covered by the Titan 24 survey). This anomaly was referred to as Dixie 20. The conductive body, a resistivity low interpreted from inversion modelling of magneto-telluric data, has an irregular shape, but extends over a length of 1,800 metres. One diamond drill hole, DX-2003-01A may have intersected the top of the zone. This hole cut a wide zone of altered felsic pyroclastic rocks, with variable pyrite content. The highest assays were 0.98% Zn and 1.13% Cu. Down-hole electromagnetic surveying indicated that this hole had penetrated a large (up to 800 Ã— 800 metres) conductive body close to its edge.

A preliminary review suggests that, in addition to the Titan 24 anomalies below the Dixie 19 deposit, and the deep anomaly at what is now called Dixie 20 there are several potential target areas where there are mineralized drill intercepts that were not adequately followed up, and geological targets such as favourable volcanic horizons. The western two-thirds of the property, including the Dixie 17 and 18 zones, has not been covered by deep-penetrating geophysical surveys. The principal zinc mineral, sphalerite, is not electrically conductive, and the absence of strong electromagnetic conductors should not be taken to mean that zinc is absent. The three VMS zones (Dixie 17, 18 and 19) have not been fully closed off by drilling and are partly open at depth, especially the Dixie 19 zone with the geophysically interpreted deep zone below the historical drill holes.

Technical material for this section has been reviewed by Colin Bowdidge, Ph.D., P.Geo., a Qualified Person as defined in National Instrument 43-101.

The Joy North property, located in the Gerry Lake area approx. 50 km southeast of Red Lake, Ontario, consists of a single mining claim comprising 64 hectares that has been held by the vendor since 1992. It covers a 1,000 metre long conductive zone, defined on the ground by a Horizontal Loop Electromagnetic (HLEM) survey. A mobile metal ion (MMI) geochemical survey has indicated anomalies in zinc, copper and gold associated with parts of the conductor. The stronger parts of the HLEM conductor also have more intense magnetic responses. 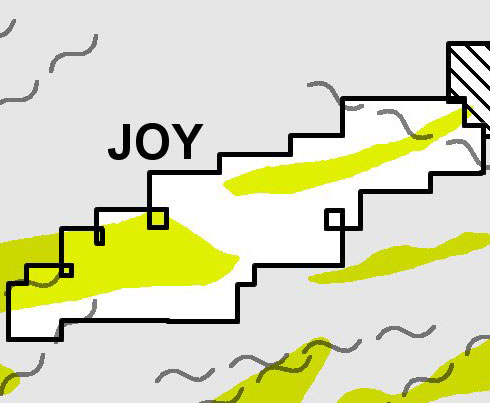 A single 48 metre diamond drill hole was put down in the vicinity of the conductor (exact location unknown) in 1970 by Caravelle Mines Ltd. It intersected a variety of metavolcanic rocks exhibiting intense alteration of the type associated with Volcanogenic Massive Sulphide (VMS) deposits. It also intersected calc-silicate rocks suggesting that the property may lie at the same stratigraphic horizon as the Dixie zone, 11 kilometres to the west.

The Joy property covers five separate mineralized zones, all of VMS character, that lie on two horizons that lie parallel to and 1,000 and 1,300 metres respectively, south of the Joy North anomaly. The Diamond Willow Zone has a historical resource estimate of 270,000 tonnes grading 4% zinc plus copper (see caution in footnote). No mineral resource, historical or otherwise, has been calculated for any of the other four zones.

Following is a list of their more significant diamond drill intercepts:

The claim group totals approx. 3700 hectares and covers a 9 kilometre stretch of the Confederation Lake greenstone belt and extends to within 1.5 km of the former producing South Bay zinc-copper-silver mine. 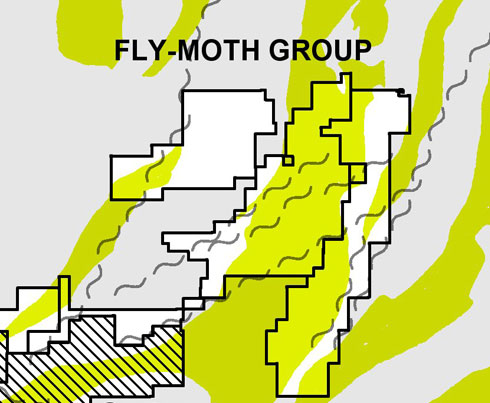 The Wasp Lake Mineralized Trend was extensively drilled by Selco; most results are unavailable. Two holes by St Joseph Explorations yielded the following:

This mineralized trend gave a strong conductive response on Pistol Bayâ€™s recent VTEM PLUS airborne survey. The Company plans to have the geophysics modelled to assess the possibility of a deep-seated massive sulphide zone.

The Fly Lake zone was tested by 4 drill holes by St Joseph Minerals in 1976 over a 50 metre length. Pistol Bay's VTEM PLUS survey gave a well-defined response on 2 lines, indicating a length of up to 400 metres. Results of the St Joseph drilling include:

This zone appears to be open along strike and at depth. The Company proposes to drill for extensions of the mineralization, assisted by modelling of the VTEM data.

There are 9 discrete VTEM PLUS conductive anomalies that do not appear to have had any previous drill testing. Their conductivity varies from very weak to moderate. Most are in areas with little or no outcrop and one is under a lake.

Technical information for this section has been provided and/or reviewed by Colin Bowdidge, Ph.D., P.Geo., a Qualified Person as defined in National Instrument 43-101.