October 20, 2021 – Pegasus Resources Inc. (TSX-V: PEGA; Frankfurt – OQS2, OTC/Pink Sheet symbol SLTFF) (the “Company” or “Pegasus”) is pleased to announce the acquisition of four Uranium properties located immediately northwest of the prolific Athabasca Basin of northern Saskatchewan which includes a historical resource estimate of 204,200 tons at 0.119% U308 at an average width of 15.8 feet (4.8 metres), containing 535,718 pounds of uranium*.  Cumulatively the properties encompass about 54,026 ha in 13 mineral claims, as follows:

Charles Desjardins, CEO of Pegasus Resources, states, "We are incredibly excited to have acquired the 20A Zone uranium deposit in northern Saskatchewan and a large land position in the prolific Wollaston Domain, where recent uranium discoveries have brought renewed interest to uranium exploration.  The 20A Zone has remained virtually unexplored for 50 years and now represents an opportunity to re-examine an old showing in the context of other modern uranium discoveries in and around the Athabasca Basin.”

The Wollaston Northeast Property is situated outside the northeastern edge of the Athabasca Basin, about 45 km northeast of the Eagle Point Uranium Mine.  The Eagle Point uranium deposits are entirely hosted by basement rocks of the Wollaston Domain.

The Bentley Lake Property is situated approximately 35 km northeast of the edge of the Athabasca Basin.  It is located at the transition zone between the Wollaston and Mudjatic geological domains.

Located on the transition zone between the Mudjatic-Wollaston domains is a notable trend as several notable deposits such as Roughrider, Midwest, Cigar Lake, McAurthur River and others; 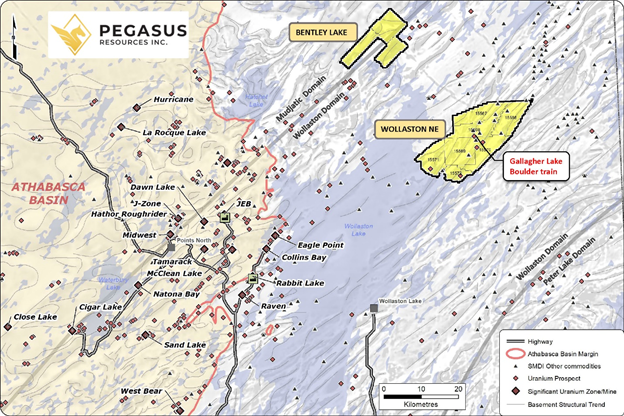 The Mozzie Lake Property consists of two claim blocks that are situated approximately 25 and 40  km northeast of the edge of the Athabasca Basin.  It is located within the Charlebois-Higgingson Lake Uranium District. 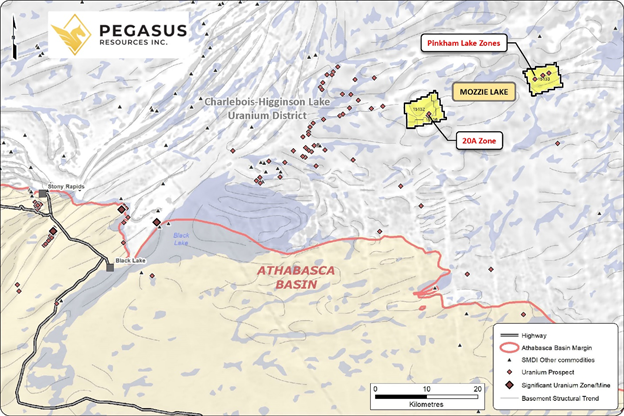 a) Grade of individual sample widths within the blocks outlined is 0.05% U308 or greater. b) Ore has been projected up to 50 feet in both directions from diamond drill intersections, and up to 50 feet beneath surface showings.

The historical mineral resource estimates listed above either use categories that are not compliant with National Instrument 43-101 – Standards of Disclosure for Mineral Projects (“NI 43-101”) and cannot be compared to NI 43-101 categories, or are not current estimates as prescribed by NI 43-101, and therefore should not be relied upon. A qualified person has not done sufficient work to classify the estimates as current resources and Pegasus is not treating the estimates as a current resource estimate. However, the estimates are relevant to guiding the Company’s exploration plans and provide geological information regarding the type of mineralization that could be present in the Mozzie Lake area.  The QP has reviewed the historical report and the historical resource estimate was prepared within a high-quality report which stated several key assumptions and criteria.

A 100% interest in the four properties (one previously announced – see news release dated October 7, 2021) was acquired from a staking syndicate by reimbursing staking costs of approximately $35,000 and issuing 1.2 million shares of Pegasus Resources. A 2% NSR will be granted to the vendors with 1% purchasable by the Company at any time for $1,000,000.  A finder’s fee of 150,000 common shares is payable on the transaction, which is subject to TSX Venture Exchange approval.

The scientific and technical information contained in this news release has been reviewed and approved by Neil McCallum B.Sc., P.Geol. of Dahrouge Geological Consulting, who is a “Qualified Person” as defined in NI 43-101.